One of the aspects of Amateur Radio that I am very interested in is digital modes. A “digital mode” on radio is a method of sending binary data using audio tones. Although the word “digital” usually refers to modern technology, there is at least one mode that has been around since WW2!

Digital modes are usually used to send text or imagery using different schemes of tones, timing and bandwidth. Some are optimized for speed, and depend on good atmospheric conditions. Others are very tolerant of noise and signal degradation.

I’ll post some examples of a couple different digital modes I use often, and maybe a video or two of actual QSOs (conversations).

Radio TeleTYpe has been around for a while. It got it’s start in the 1930’s, when the first commercial RTTY broadcast was made between San Francisco and Hawaii. RTTY was based on landline teleprinter communications in the 1800’s. RTTY was used by the armed services as a means of transmitting data very quickly. RTTY made it’s way into the Amateur Radio community after WW2, when used radio teletypes were decommissioned from service and sold to the public.

RTTY uses 2 tones to represent an ASCII character set, plus some special characters. There are several different frequencies used, but Amateur Radio almost exclusively uses a 45.45 Baud rate with 170Hz spacing. Here’s what it sounds like on the air:

I think Hell is one of the coolest “digital” modes. I wouldn’t really consider it purely “digital”, since characters aren’t really encoded in binary, but more as a 5×7 matrix, like those old dot-matrix printers. In fact, Hellschreiber was actually printed out on long strips of paper! It was created back in the later stages of WW2 by the Germans, who used a helical rubber roller to tap the paper roll against an inked spool to create characters.

Today, we use computer software to re-create this mode. The software I use produces strips of “paper” on which the decoded characters appear, using the same technique as the original apparatus, except with screen pixels instead of paper.

Here’s a QSO I had with N2FYE: 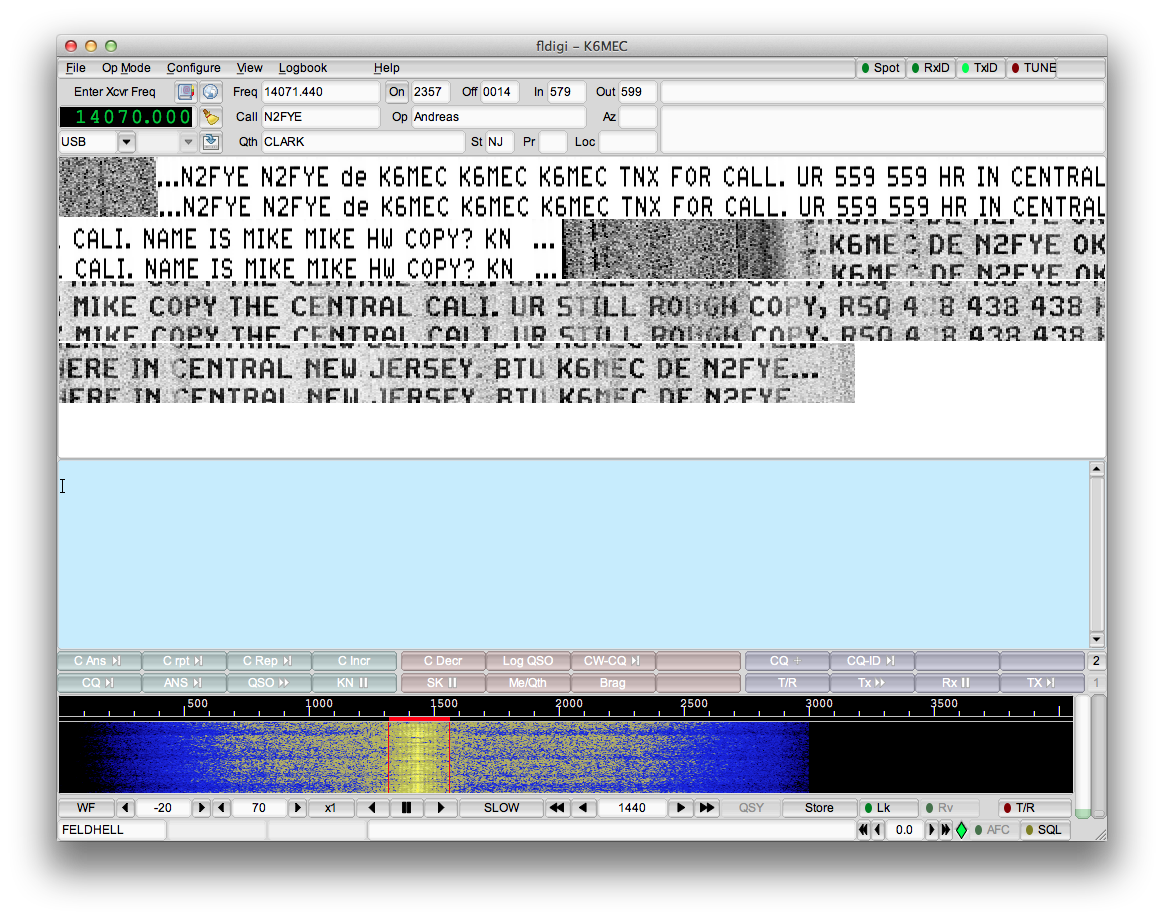 PSK31 is a pretty neat mode. It was crafted specifically to be effective in noisy conditions, and supports the entire ASCII character set. PSK31 doesn’t use much bandwidth at all, and makes for an elegant and simple way to have keyboard-to-keyboard “rag chews” even when the atmosphere doesn’t want to cooperate. I use this one a lot, especially since the KX3 radio doesn’t need the addition of a computer to encode and decode PSK31 transmissions (it can be decoded directly on the KX3’s screen, and you can send using a morse code key).

The PSK31 software I use can detect and decode multiple conversations at once, which makes it easy to see who’s calling CQ, or watch a conversation happen.

JT65 is an interesting digital mode. Unlike the others, where you can maintain a conversation from keyboard to keyboard until you both run out of things to say, JT65 has a very specific format to a QSO, and a strict limit on the number of characters that can be sent in each transmission. This is in part due to the the timing. Transmissions always begin on the minute and last only 47 seconds. Then, starting on the following minute, replies are sent also in the span of 47 seconds.

JT65 has a specific ‘syntax’, or order of transmissions, and you really can’t trade words at all, given the character limit. The basic JT65 conversation goes thusly:

And that’s it. Simple, straight forward, and a little boring. The fun, however, is that JT65 is extremely good in poor conditions. In fact, sometimes you can barely make out the singsongy tones of the transmission! It’s kinda cool sounding to me.

Here’s a sample of a JT65 conversation I had with VK3BM up in Canada using JT65-HF, an OpenSource program written by W6CQZ. 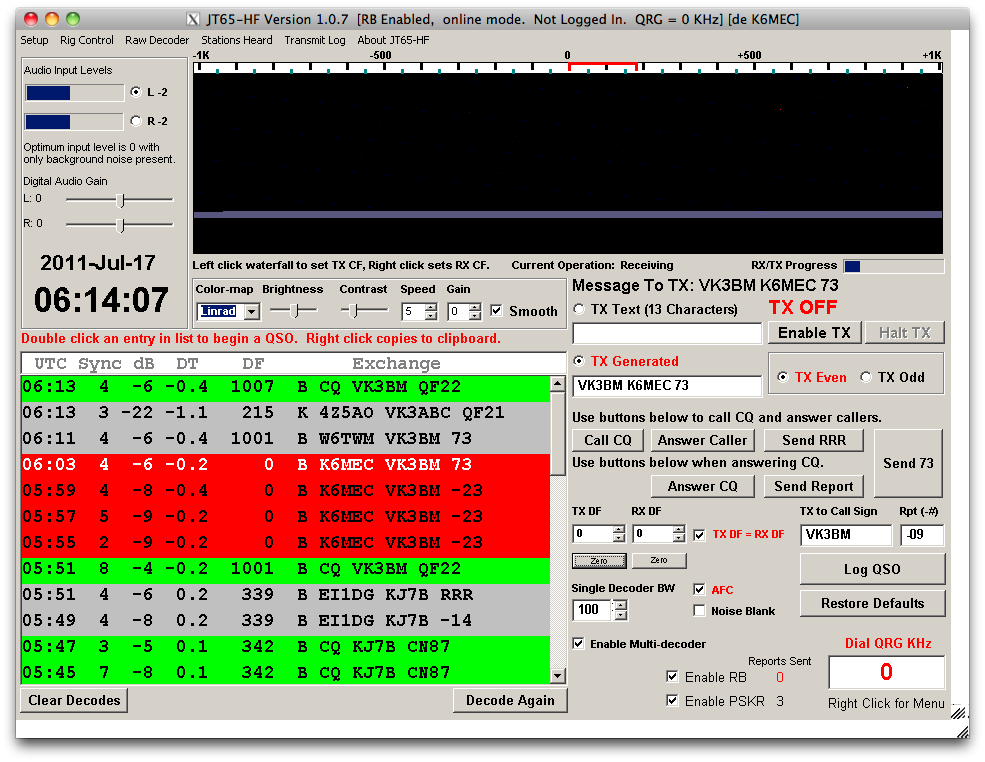