A Ham operator’s “shack” is his radio room, his man (or woman) cave, and also probably his main money pit. The shack can range from a radio and tuner atop the washing machine to full-blown studio rooms filled with gear and wires.

I’ve never really had a room filled with gear. In fact, I enjoy operating spartan. I did, however have the pleasure of operating out of a ham radio club at Cleveland State university. The club’s “shack” was quite well done, and was in the top floor of the dorm I lived in. 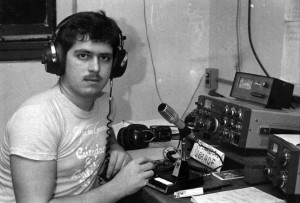 Here’s my rather humble shack when I lived in Sacramento: 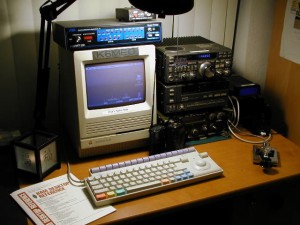 Sometimes the “Shack” was the dining room table:

Here I am operating station WB8ADF atop Cleveland State Univeristy’s Fenn Tower c.1985. Next to it is me operating in 2011.

Since I enjoy portable operations, a lot of my “shacks” are hauled up to hilltops. Here’s a typical setup I use (this was on Bald Mountain in the Bay Area): 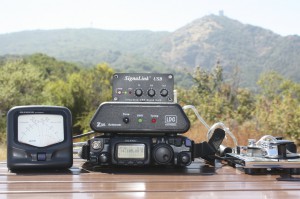 Mountain-Topping from Bald Mountain in the Bay Area, CA

Here’s the first HF radio I owned: the venerable Yaesu FT-757GX. Underneath is the matching antenna tuner and power supply. It covers all the HF bands and is capable of 100 watts output.

I’ve had and used the following radio gear over the years: