So I’ve been reading up on software defined radios and came across a couple guys who set up and ran their own private BTS (base station Transceiver Site, a.k.a cell site) at Burning Man. They basically were able to provide mobile telephone service to the masses…for free!

Here’s a picture of their setup… 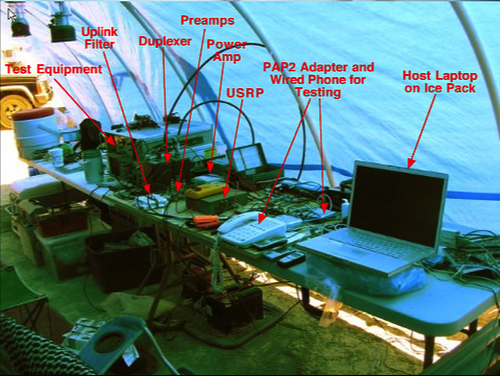 OpenBTS and Asterisk, along with a RangeNetworks SDR comprised the BTS for Burning Man.

And here are some links:

Well, I thought this fascinating, and decided to look into it. They used an Ettus USRP as the radio, and then some filters and an amp to boost the weak output into something that had some reach. I believe also their antenna system added some gain to the signal.

The result was that people who were at Burning Man could use a cell phone to call other people at Burning Man! The first year there were no outbound trunks, so you couldn’t make cell calls back home, but it was a really cool way to use technology out in the wilderness, which is something I’ve always been interested in.

So, I looked around and bought the same USRP radio off of eBay. The next thing I needed was the software, which is all open source. It’s called OpenBTS, and provides the logic to run the radio and communicate with the phones. There is also another component which handles the call routing, voice mail and such.

I’m really close to having the system ready. The only thing holding me back is getting a differnet clock source for the USRP. The original USRP’s built-in clock is not procise enough, and is on the wrong frequency.

There is a company that has manufactured an add-on clock for the USRP, but it’s been expensive at $250. I just noticed lately that the price has dropped to $99, which was wonderful! Unfortunately, the company is out of stock and waiting for enough interest to do another production run.

Once I do get the clock source (or just build one myself), I hope to have the system running off a the BeagleBone Black, which is a micro linux server that fits in the palm of your hand! Once that’s working, it’ll become our portable cell system when we’re out in the RV!

Bay Area Amateur Radio operator licensed in 1984.
View all posts by MikeC →
This entry was posted in General. Bookmark the permalink.